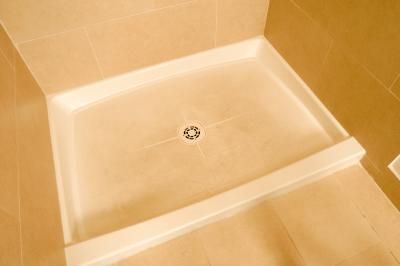 How to Remove a Fiberglass Shower Pan

Hi I’m mark Donovan from home edition plus.com and today, I’m in the process of removing a fiberglass shower pan. So we can build a custom shower pan and basically do a brand new ceramic tile shower all right.

So the first thing going to do to remove this pan is we may remove some drain water from the drain. Pipe shouldn’t, be any issue shouldn’t really be a problem with just in case. I decided to do this so I’m using a like a turkey baster and just sucking out some of the water in the drain, pipe to again prevent any water spills shouldn’t be hanging, but just to be safe.

So now that I’ve drained some of the water drain pipe, I put a rag in here just to prevent a sewer gases from coming up and I’m basically going to take my drill and drill some of the rubber flange material that which is a rubber flange gasket.

That goes up tight against the drain. Pipe will remove some of this material and then the shower pan should be able to lift up around the drought drain pipe as they drill out the rubber flange area. I want to go too far down into the subfloor so easily.

You want to go down just an inch or so I’m working away all the way around the perimeter of the drainpipe, I’m also using a utility knife to help cut around the rubber flange to help remove some of the material to make it easier to lift the Shower pan off of the drain pipe all right, so once we’ve drilled it down, I just used a vacuum cleaner to suck up around it, so I can then remove the rag and hopefully let this the shower pan off off the drain.

Depending upon your particular situation, you may see flange brackets, that are nailed or fastened to the wall, studs that go out over the shower pan liner and that in that particular case, you need to remove those clamps or brackets as well, so that you can lift the Pan out, in this case, there were none, so this pan should lift easily up now, so we’re just using a flat bar to pry it up and I’m using a screwdriver to hold down the drain pipe a little bit and, as you can see, it’s coming up Fairly easy, as you can see, as we go up the drain pipe adjusting now the flanges coming up there, we go so now we’re just lifting the pan up and out of the shower stall area and, as you can see, there’s our opening for our drain pipe And we’re just about the stage now we can start building up our new custom ceramic shower all right.

So that’s all it took to remove the shower pan. Basically, a drill to drill out the rubber flange make sure no brackets are holding the shower pan to the side, stud walls. And then, if that’s the case once I removed just simply lift the pan up and out of the of the shower drain.

So this stage we’re ready to begin rebuilding the shower to a custom ceramic tile shop. If you have other home-improvement questions visit us at Home Edition plus calm today,

Don’T know what’s behind there little controlled demos, good heroes on this side, the base is still connected to the drain pipe. So in order to get it out, we’ve got to cut this pipe now dimension wise.

It is 48 inches wide, which is perfect, because that’s exactly what we have for our opening right here now, our old shower base is 34 inches. Now this one is 34 look at this. It actually has an apron where it goes out to about 36.

So what we’re going to have to do is to mark this floor and break away this tile and substrate to get the new base down onto the subfloor. Okay. Look at this here, though, look at ya just as my guest.

This pipe actually stands proud of the studs, so now it means that we can’t get this all the way back the base, but also means we won’t be able to get the cement board to span between stud to stud all right.

So we’re going to have to just pad those studs up just a bit: we’ve got half-inch plywood cut to the width of the studs and we just screw them in place. Okay, so I’m going to trace the front edge of this apron to see how much of this tile and substrate we have to take out.

Well, I’m also here I want to mark the drain now the old one used to be right about here now. I can mark the center of that pipe right there and make it easy to cut the hole. Okay now it’s time to install the strainer.

This is the pot you will see from inside. The shower has a screen that goes in last. This is all chrome plated. Now it comes in a couple of pieces. Now it has a gasket right here and that’s going to sit on the finish side of the shower.

That makes a watertight seal and that sticks right through here and then there’s a gasket right there and enough. We just want to tighten it up really well, and this is really the most important step is to make sure this base is level now front to back.

If it was pitched to the front water might run and drop down into the floor, it was pitched to the back like this water could pool at the back of the base, so we’re good front to back. But when I saw looking around from side to side no matter where I check it looks like I’m down a little bit on this right hand side same here and same here, so what I want to do is I want to install a shim now at the Base of this shower base, there is a spacer right here.

I’Ve transferred this location of where the spacer is on the base of the shower base, and I put it right here now with a shim. I can establish just how much of a shingle thickness or shim. I need and that bubble is perfect, so I secure that and now we can put the base into place.

Okay, let’s see how we did. Oh, that is lovely now it’s time to secure the base to the studs. I do that by drilling some pilot holes. What I’ll do is a secure it with some rust resistant screws and now I’ve dried, fit a new trap with new fittings, and now all we have to do is clean it and glue it and then make our final connection right up top to make.

The final connection between our PVC drain pipe from downstairs and this strainer – I use this black compression gasket. Now I lubricate a little bit of hand soap to make it easier to pull it together.

Michael, can you push up on that drainpipe yep good, keep coming, keep coming! Okay, all that now I’m going to push down against you! It’S got come now. Let it come! I’M going to drive it down!